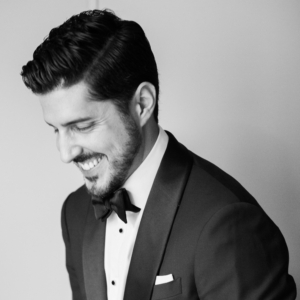 “Ciufo is an expert at telling the story – creating and capturing musical and/or cinematic moments…a keen romantic sensibility, deadly intonation, excellent taste, high musicality and a deeply communicative approach insure that Ciufo is well on his way to International recognition”

Michael Ciufo’s career has explored performances across the globe, including an unforgettable performance that launched his career at the young age of 17 at the Pantheon in Rome, Italy. His sophomore album release – Momento, debuted at #15 on the Canadian Classical charts in 2016, and was followed up by a 4-song Christmas EP, Perfect Gift, that features an original song as well as Michael’s interpretation of three classic Christmas carols.

Michael is excited to get back to regular performances following the COVID-pandemic. He is especially excited to be returning as a main performer at the Cathay Ball in support of the Mon Sheong Foundation. Prior to 2020, Michael maintained a busy performance schedule and had been featured performing the Canadian and American National Anthems for the Toronto Raptors. Michael has toured the southern United States and performed to sold-our audiences with pop-opera vocal group, Vivace [vee-vah-chay]. Michael is a graduate of the prestigious Glenn Gould School of Music at the Royal Conservatory in Toronto and has worked with notable conductors Arthur Post and the Thunder Bay Symphony Orchestra, the late Kerry Stratton and the Toronto Concert Orchestra, and the North Bay Symphony Orchestra conducted by Thomas Jones, to name a few.

His most recent operatic performances include the role of “Alfredo” in La Traviata (trah-vee-ah-tah) in celebration of Giuseppe Verdi’s 200th birthday in Fidenza, Italy and “Gernando” (Ger-nan-doe) in the Canadian Premier of Rossini’s opera Armida (Are-mida) with Opera in Concert in Toronto.

For more information about Michael you can search him on facebook, instagram, and YouTube, or please visit www.michaelciufo.com. You can also stream Michael’s recorded music on Spotify.